Magic and melodies on the Bain’s Symphony Stage

It’s not always easy to bring about positive change in the world. You need courage, vision, tenacity, and an unwavering commitment to do the right thing. And if you want to do it on a mass scale, some funding, and making it fun, doesn’t hurt either.

I find myself sitting cross-legged on the grass underneath a stretch tent, facing a lone man playing piano to a crowd of a few hundred. This man is Aron Halevi, the founder of South Africa’s legendary band Freshlyground, and the diverse but intimate crowd is captivated. Aron’s music is heartfelt, moving, highly emotive and feels superbly real – an overtone that makes it feel like the soundtrack to a movie epic. Playing the piano with his eyes closed, he is seated on a cajon drum box and simultaneously whistling a spellbinding melody.

This is the Bain’s Symphony stage and Greenpop’s Reforest Fest 2022. We have spent the morning planting over 5000 trees, 5064 to be exact, and the gentle rain outside the shelter of the tent feels like a blessing from above, nurturing the roots of the young saplings and verifying that our sweat was more than worth it.

Aron looks up at the crowd. “I was supposed to play a real piano, but due to the rain, I’m using this fake one (a keyboard); to me it’s a bit like having face to face conversation versus a Zoom call. Kind of appropriate given the times, after two years on Zoom.” He smiles, takes a sip from his jar of Bain’s iconic signature Leopard & Lime cocktail and starts the next piece. 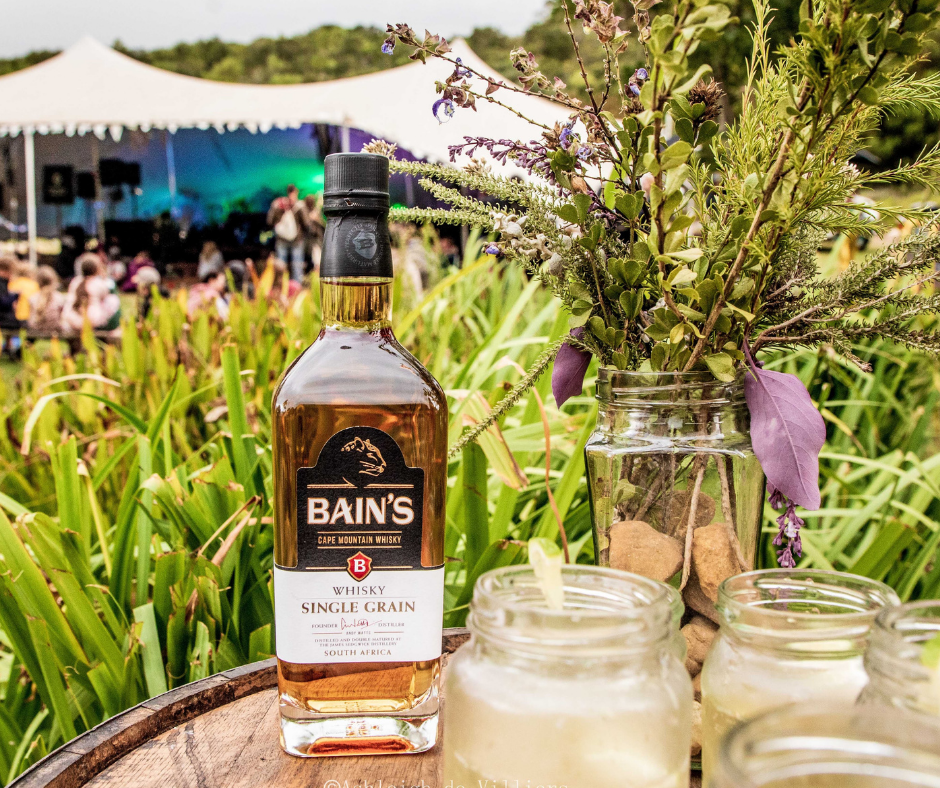 This collaboration of Bain’s and Greenpop is a seamless match. Bain’s Cape Mountain Whisky has won numerous international awards, such as the World’s Best Grain Whisky for the second time in 2021, and notably, their home at the James Sedgwick Distillery in Wellington took the world title of Sustainable Distillery of the Year in 2020.  They have shown remarkable innovation such as aging their whisky to music and here, at the Reforest Fest, sponsoring not only the Bain’s Bar and Symphony stage, but supporting the South African music legacy through bringing artists like Aron, but also Zolani Mahola from Freshlyground renown, Jeremy Loops, Divine Mahara of Zimbabwe’s Got Talent fame as well as Donovan Copley and Xoliswa Tom from Hot Water.

Maishe Mamabolo from Bain’s says: “All of our awards are a result of Andy Watts, our master distiller, he is really the catalyst. He has taken Bain’s, which is only 13 years old, and won all of these awards from a sustainability perspective at the James Sedgwick Distillery, specifically how they use their water. Andy Watts’ curiosity to keep remastering the liquid has obviously spoken for itself – the result is a remarkably smooth whisky, with distinct notes of spice and vanilla, and this sustained effort is the very reason why we have been awarded so well.”

This is the perfect compliment to Greepop’s dedicated and revolutionary work, getting people active rather than anxious about climate change, working to restore ecosystems and having planted over 150 000 trees over the last 12 years across Southern Africa. This year’s event at the exquisite Bodhi Khaya retreat near Gansbaai sees almost 800 participants getting involved in this momentous movement, sharing knowledge, inspiring positive change and having fun together. Bain’s has been supporting restoration in South Africa by their significant contribution to events like this, as well as their recent pledging of 5000 trees, thereby conserving and strengthening our shared natural legacy. 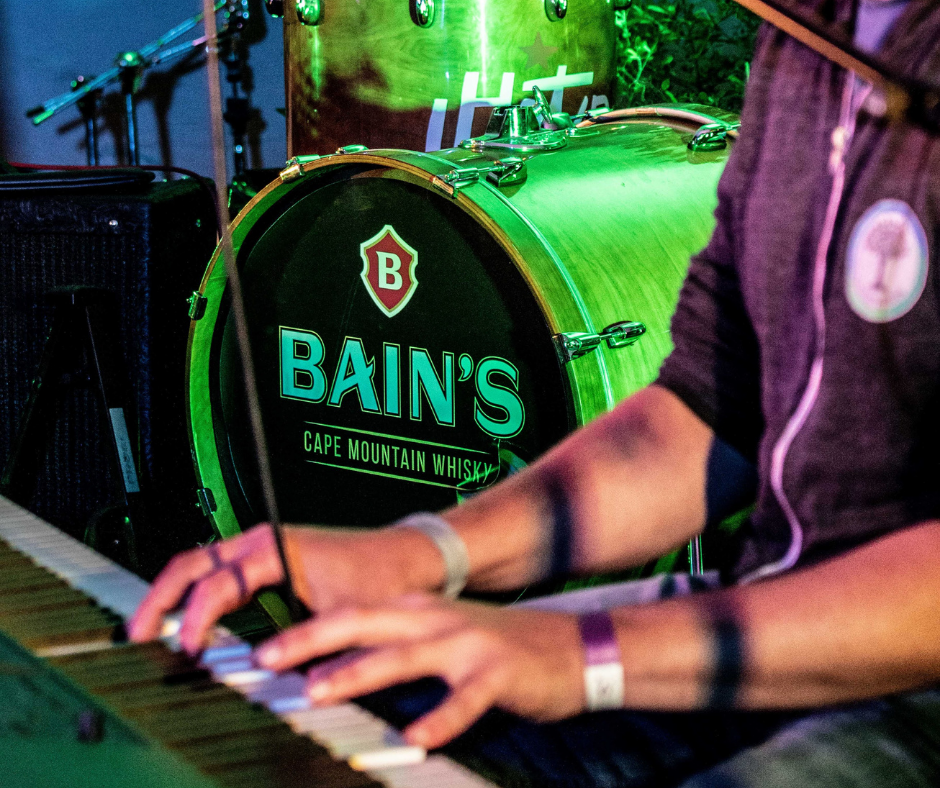 Towards the end of Aron’s set, he looks up at the crowd. “I’m going to do something I challenged myself to do. I feel safe around tree planters.” He tells us that the next song that he wrote he has only played to an audience once – an audience of friends in his own home. “It’s the hardest thing I’ve ever written.” He performs it beautifully; a raw, sincere, and self-exposing ballad. The warmth and connection is tangible in the crowd. 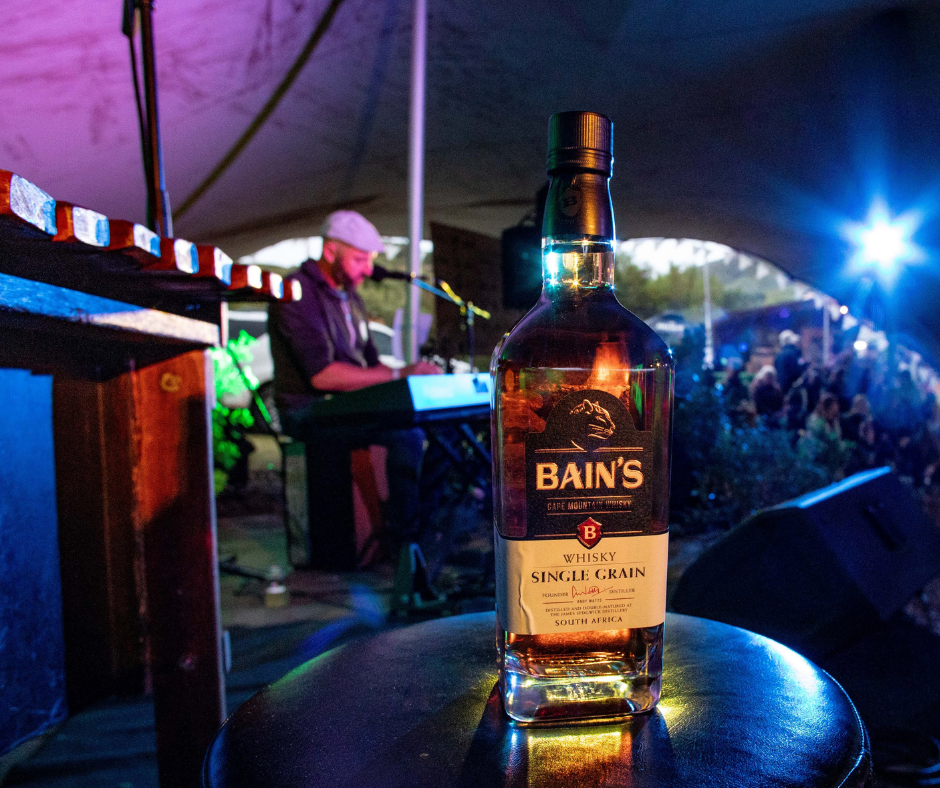 Later in the evening, during Hot Water’s set, just before the chorus for their renowned mbaqanga single Wamkelekile, lead singer and guitarist Donovan stop the song and in a remarkable moment of homage, calls the other SA music stalwarts onto stage. In a brilliant culmination, with Jeremy Loops on harmonica, Zolani bringing ethereal vocals and Aron contributing his own deep-rooted and profound talents, these stars perform a Wamkelekile medley with Doo Be Doo and various other crowd favourites. Four of South Africa’s best-known and loved musicians crescendo in an unforgettable moment of power and unity.

Speaking to Donovan afterwards, he talks about South African music and the feeling experienced by all present, saying it is “definitely not a one-way experience, it’s a collective experience, and to collectively experience that kind of connectedness and flow is very, very powerful. When everybody is on fire in that way, the heat that comes off of that is pretty extraordinary.” He decided to call them on “in acknowledgement of the crossover artists that have created this kind of bridge; acknowledging the spirit of South Africa and celebrating it in a space that is really set up to be grateful and sensitive to that physically. The land and festival is set up to being present. When everybody is present, really right there, there is an enormous power that happens, an enormous connectedness. It’s difficult to describe what happened there. The environment was really set for something magical to happen.” He concludes, saying: “I was really honoured and proud to be in service to this. It’s the deep spirit of South Africa and particularly Mama Africa to be connected to that and to see how intimately we are a part of that is deeply satisfying. And I just love it.”

Zolani radiated. “It was just lovely to perform at Greenpop. That Hot Water moment together was lovely, for them to pay homage to South African musicians, and also to be a part of that legacy. It was quite a powerful moment of nostalgia, but also of an honouring, what has meant a lot to people. I loved being on the stage” 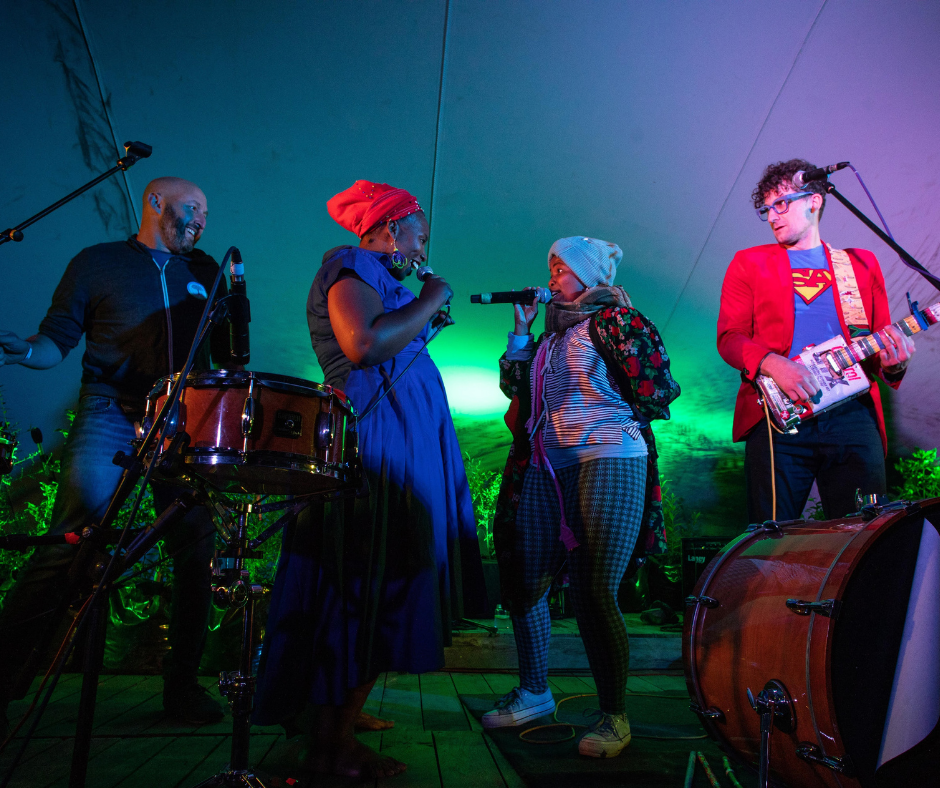 Jeremy, a founding member of Greenpop, said: “that was undoubtedly the best and biggest stage we’ve put on at a Greenpop event.” He extended special thanks to Cape Audio College and his sound engineer, Ian Watson, who brought in and ran the whole system. About the impromptu collaboration on stage, he felt it was “a real full-circle moment to watch bands that I respect so much, perform to such an adoring crowd, at a festival I was lucky enough to help start. And then be asked to join on stage for a feature, and be given an honourable mention! Haha. The whole thing just resonated very deeply for all of us, I think.” He continues, “All the artists that performed that night – people felt an incredible closeness, and music is always the way that we crystalize these events, the feelings and everything that is built during the day, environmentally and with the planting. It all gets crystallised in the joy and the fun and the connection that is brought together through the musical side of our events. It was again so lovely to witness and I was so proud to be there and see it. I was so inspired by the whole Greenpop team and organisation who are acting with such power to get so much done in such a professional way. Shoh! I was just beaming.”

Says Maishe form Bain’s, “We really hope to keep partnering up with people who appreciate the art of Remastery and creating such beautiful moments.”

Making real change, both environmentally and in bringing people together, doesn’t have to be difficult, and it happened at this year’s Reforest Fest. Those who were there felt it and are thankful to Bain’s and Greenpop for this connectedness and the many meaningful moments, showing us that it can be done and how should be done.

In the words of Misha Teasdale, Tree-E-O of Greenpop, “The legacy of South African natural heritage is critical, this becomes ever possible when you bring in the celebration of our cultural heritage. Our landscapes and the humans who live within them are so inextricably connected. Bringing the best outpouring of humans and nature experiences together. That’s what happened here at the reforest fest largely thanks to the collaboration with our favourite local whisky – Bain’s.” 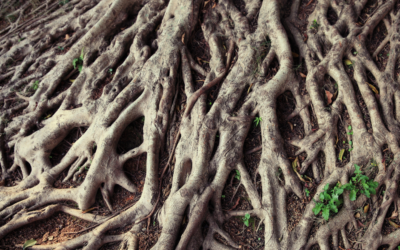