Can art play a role for the environment?

In a world that is ever-changing and that needs a great shift in people’s behaviour, what is the best way to communicate that need for change? Does (or can) art play a role in the environment and how people interact with it?

Art is often an easier medium by which to communicate to people in an effective way; art, by nature, informs and changes perceptions.

From this perspective, the Conservation Conversation Corner was born. The concept came about a year ago between Greenpop and Chava Alheit Art Projects in the form of a grant application. We received news earlier this year that UNESCO-IFPC would fund the project. Before we could catch our breaths, Propertuity Development was onboard, B-Earth Eco-Friendly Paint was donating paint and Vogel Design was donating a custom-designed outdoor bench. This gave life to a project that would bring a host of people together to create something beautiful and meaningful. The concept was to create twin artworks and spaces that would physically, visually and conceptually link the two cities chosen for the project: Livingstone, Zambia, and Johannesburg, South Africa. Both cities have a constant influx of multicultural people and, with regards to the diversity of nature itself, jackals and hyenas form a nightly chorus in Livingstone and Johannesburg’s trees form one of the largest man-made forests in the world!

The Livingstone art project was created over three weeks from 25 June until 16 July during the Greenpop Zambia Festival of Action, ending with an official unveiling by Livingstone’s Deputy Mayor Grandwell Chibamba. The Johannesburg project is planned to happen in Maboneng during the Joburg Art Week in early September. A prominent theme that emerged as the artwork unfolded, was that of female power. To bring this idea to the fore, and link it with conservation, the decision was made to focus the artwork on bees. These busy creatures live in a matriarchal society in which the Queen Bee sustains the colony and all of the worker bees are female. Worker bees work hard to create honey and look after the hive and in Zambia, women are the backbone of most households and communities. While standing on the scaffolding to paint the large wall mural, Mwamba received a lot of comments from passersby. Many were surprised to find a woman standing and doing what is considered a “man’s job”. It was empowering in many ways and the theme of strong women was only emphasised by the mural that featured an image of a woman wearing a honeycomb head wrap.

Many women and men passed by contributing to conversations about the artwork. One that especially stood out was that of Josephine Monde, who was the very first woman ever employed by the Livingstone Tourism board in 1966. She walked past and was thrilled to find out about the UNESCO art project. She specially brought her grandson to be involved. “This has added beauty, not only to the building but to the whole of Livingstone. Tourism depends on the environment, without nature we have nothing.” She further added: “I love the colours. Those are African colours and they blend in with the natural environment. I’m also proud that bees are matriarchal. I was the first woman in a high position in Tourism. Although I am retired, it’s an honour to have you here.“ During our time in Livingstone, Mwamba created the wall mural with earth-friendly paint that saw many hands take part; Owen created the tree sculpture from scrap metal; Heath set up mats everyday with collected trash where people could sit down and create something by repurposing trash into art. The materials used all kept the environment in mind and the entire space is now interactive with a Vogel bench, couches made from moulded cement and a tire swing.

Our hope is that the bright African-inspired colours will attract the public to interact with the space and start conversations; that every person that looks on the piece will go home and discuss what inspired them, new learnings and how they think they can make a difference for the environment. Zambia has a very large problem with trash and many of the local craftswomen and men that joined the art project almost every day were particularly interested in upcycling trash into art and becoming more aware about the issue of waste.

Our hope is that the bright African-inspired colours will attract the public to interact with the space and start conversations.

Freeton Matonga, an artist in Livingstone, had this to say: “The mural and the recycling are amazing because I can see the response from the people around here and how they are reacting to it. They are seeing that they can find some value of the materials [waste] that we are using. I hope we are going to have some kind of change of mindset, not throwing around anyhow, maybe trying to convert things like recycling to keeping the environment clean.”

You can find the art space in Livingstone in front of the Livingstone Tourism Office and another wall mural next to Zambezi Café. The Johannesburg artwork will be created near the Skateistan Institute in Maboneng during Art Week in Johannesburg. Be sure to follow @GreenpopSA and @ArtAfrica_mag on Instagram for updates and to join us in getting creative, if you find yourself in the area.

Keen on planting trees and getting active about the future? Come to our Eden Festival of Action to help us regreen the Garden Route. 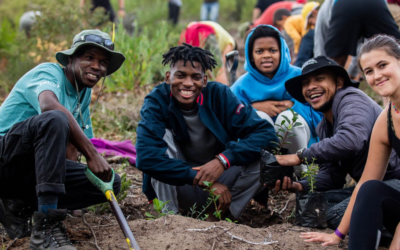 Restore & Reconnect at Reforest Fest 202225 APRIL, 2022By Jessie LeverzencieAnd just like that, the 11th annual Reforest Fest has come to an end, and what a fantastic festival it was getting active, not anxious for the planet. 5064 trees are officially in the... 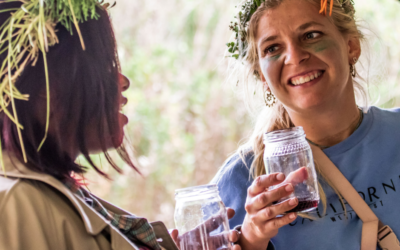 During Greenpop’s recent Reforest Fest 2022 in Walker Bay, WFF South Africa hosted a wine tasting with four very special wine farms, with the aim to shift the narrative around South African wine culture, creatively exploring the nature-based and regenerative wine farms by celebrating the wine through a multi-sensory tasting experience. 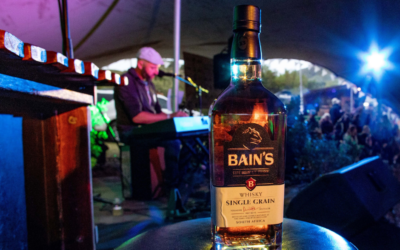 Magic and Melodies on the Bain’s Symphony Stage

Magic and melodies on the Bain’s Symphony Stage21 APRIL, 2022By Scone MaloneIt’s not always easy to bring about positive change in the world. You need courage, vision, tenacity, and an unwavering commitment to do the right thing. And if you want to do it on a mass...